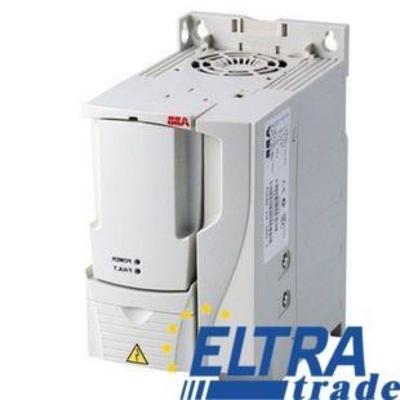 ABB general purpose ACS350 drives are developed for application in engineering.  In serial type manufacturing the consumed time per unit is crucial. The construction of drive allows to minimize the time for installation, setup and commissioning.

Initially this line of ABB drives was created as possible more user-friendly and at the same time having a highly logic driven. They possess the wide spectrum of possibilities, that allows to apply them in difficult applications.

ABB ACS350-01E is designed for application in the most various machines and mechanisms. Drives ideally befit for the use in food industry, for treatment of materials, in textile, polydiene, woodworking industry and in the production of rubber and plastics.

Their features are:
- compatible sizes on a height and depth,
- comfortable settings,
- optimized user and industrial interfaces,
- modern software and compact construction,
- programmable sequences of control,
- high protecting from unpenetration of dust and moisture (IP66 / IP67),
- Flashdrop for the rapid tuning of parameters.

A series drives for machinery protection class housing IP66 and IP67 is constructed for harsh conditions with increased requirements.
Construction of ACS350-01E drive and its materials, that are proper to sanitary requirements, make the drive notch filter against bacteria and can withstand frequent washing of the case. The drive is certificated NSF.