What is the working principle of potentiometer? Main types and applications

Potentiometer (pot) is a device for dividing and regulating voltage by adjusting resistance. 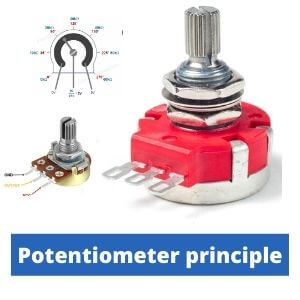 What is potentiometer and its principle?

The potentiometer is similar in structure to a rheostat (a special device for regulating the voltage and current in the network, also using resistance). However, difference between rheostat and potentiometer consists in the number of pins. While the rheostat has two connection points, the potentiometer has three. 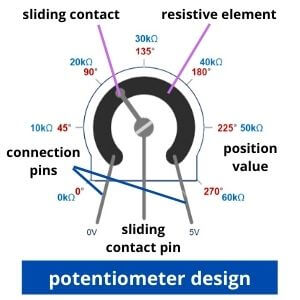 The resistor has already a certain resistance level (unchanged), but in the pot you can change this level by displacement the third contact. This function is performed by moving this sliding contact (wiper) along the resistive element. At a certain slider’s position there will be a certain voltage value.

The main purpose of a potentiometer is often to adjust the voltage value. In this way, a user regulates parameters of the equipment (sound volume, power, output voltage, etc.). There are also different potentiometer knobs types. It can be a button, switch or wheel. 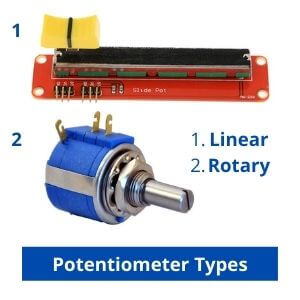 There are two types of potentiometers depending on the slider movement:

Rotary potentiometer has a sliding contact that moves in a circle. Its position is determined by the angle. In this way, the user adjusts position by changing its angular position.

Rotary potentiometers can be single turn or multiturn. In the first case, the device can measure the change only within one complete rotation of the knob, in the second it registers the result in several complete revolutions.

Linear (slide) potentiometer has a sliding wiper that moves in a single straight line (along one axis). 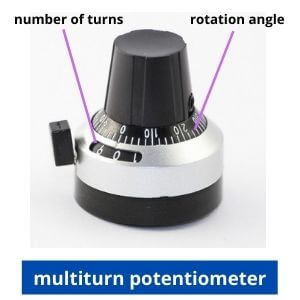 In this way, the user regulates resistance by changing its linear position with wiper.

There is also an intermediate solution, the string potentiometer. It has a drum to which a cable is attached. With such approach, it is possible to measure the linear displacement with a rotary device. We have already described a similar principle here: Baumer cable position transducer.

Trimmer potentiometer (trimpot) is one of the most popular model. It acts as preset resistors with three terminals. Their resistive element has the form of an arc. They are commonly used to tune or calibration electrical circuits.

Thumbwheel pot (thumb pot) is another popular model. Its difference with common types is in small thumbwheel usage instead of a knob.

Digital potentiometer (digipot) is a special micro device that electronically simulating the same functions as mechanical pots. Such units are used for trimming and calibration of analog signals.

That is all about the movement, let’s talk about results calculation. 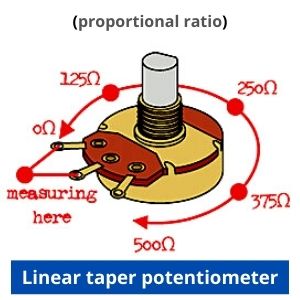 Pots are also divided into two subgroups depending on the principle of operation:

Linear taper potentiometer has a proportional ratio of slider displacement and resistance change. The letter A denotes this type. Such devices have good results of precision and low price.

Logarithmic taper potentiometer calculates the change between the turn of the knob and therefore the change in resistance value according to its logarithmic formula. In such devices, the change of a parameter (shift) has high values at first, and then gradually decreases. Such equipment is usually denoted by letter B. The log pots are more expensive, but using them, an operator can make quite accurate adjustments in certain zones. 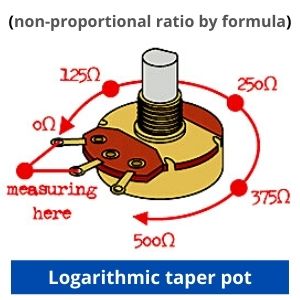 Reverse-logarithmic (exponential) potentiometers have the same principle as the logarithmic ones. Nevertheless, they use its own formula for result calculation. The difference from the previous type is that change of resistance parameter occurs in reverse order, i.e. first, it has a slow shift, and then it is gradually accelerated. Such devices are used instead of common log pots depending on the required purpose. Revers log pots usually denoted by letter C.

Attention! The designations (A, B, C) are international, but you should always carefully read the specification or manual of your product, because some manufacturers may use their own designations (type J or F for example).

Advantages and disadvantages of potentiometers

Let’s talk about their pros and cons.

What is a potentiometer used for?

The simple design and low price of the device guarantee the potentiometer's worldwide use. The pots can perform not only as voltage dividers. Using them, you can also measure speed, acceleration, voltage, frequency and many other values. Today, such equipment works almost everywhere in both industrial and domestic usage. 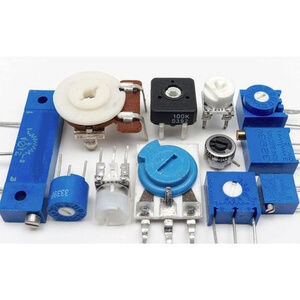 Here are the most popular applications of potentiometers:

They are also used in calculating machines. Elements that perform calculation functions often have this type of resistor in their design. They are also operating in various household appliances, for example, in the volume control in an audio system, where they can actually act as an encoder for angular displacement regulation.

Eltra Trade is a reliable sensor supplier. We have a wide catalog of sensing systems including Eltra rotary potentiometers and Eltra linear potentiometers. Check it out!