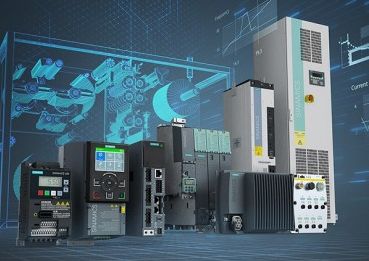 What is a VFD and why is it used?

What is VFD: A frequency converter provides a significant reduction in power consumption by regulating the speed of the motor because the motor is not running at rated speed and not at full power. In the absence of a frequency converter, it is possible to use only one speed and rated power regardless of the load of the system at the time. This is particularly evident in the case of water head or airflow in a fan. In such cases, the output is controlled by throttling with a damper and the head is controlled by the inlet vanes.

Many HVAC systems in commercial and industrial buildings use single-speed AC motors to operate the fans. The inlet airflow of the fan is controlled by blades or dampers as previously mentioned. An alternative method of control is to use a frequency converter, which will provide motor speed control that will remove the damper, thereby simplifying the system design.

How does VFD control motor speed?

The use of VFD makes it possible to change the speed of rotation in the range from zero to maximum (rpm) at maximum torque, it is also possible to exceed the maximum allowable speed of rotation while reducing the torque. The VFD controls the output current frequency by converting the input AC current to DC, then performing pulse width modulation on the voltage to obtain AC current with the required characteristics. 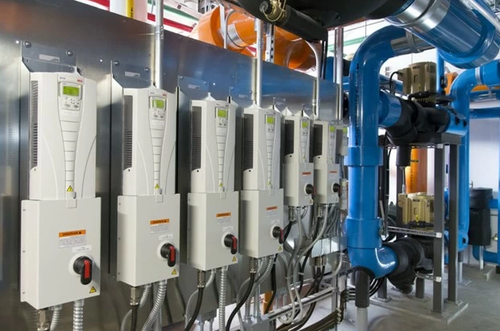 The mains voltage is first fed to the rectifier, where it is transformed into direct current. Then it is smoothed by capacitors and fed to the transistor converter. Its transistors in the open state have extremely low resistance. They are opened and closed at certain times by electronic control. A voltage similar to a three-phase voltage is generated when the phases are shifted in relation to each other. The pulses are rectangular in shape, but this does not affect the VFD operation of the motor at all.

The economic effect of the application of VFD is well illustrated by pumping stations in municipal water supply systems. The VFD drive working is characterized by the need to maintain a certain pressure in the waterline, which is functionally related to the time-varying water consumption. Before the emergence of control systems using a frequency drive, pressure control was carried out by the number of including variable frequency, drives pumps units simultaneously in operation, as well as by the position of gate valves, i.e. by throttling.

In some cases, the need for smooth control of the angular velocity of shafts of mechanisms is dictated by the technology itself. For example, the capacity of boilers and power units of thermal power plants is regulated by smooth change of capacity of fuel supply mechanisms. At SDPPs and TPPs, operating on coal, the latter, before supplying to the boiler furnace, is crushed in the mills to the pulverized state. Feeding the coal dust into the furnace is carried out by the DFD (paddle dust feeder). The drive of this mechanism is traditionally carried out by a DC motor with adjustable speed. Regulation is made using a thyristor control unit. DC motors have several operational disadvantages. They are expensive, the brush mechanism of these electric machines is subject to rapid wear, is very sensitive to dirt, and needs periodic adjustment and cleaning.

In addition to the use of DC motors, the stepless control function is realized using mechanical variations, for example, in large machine drives. The use of mechanical gearboxes is always accompanied by considerable losses, and such systems have a limited control range. 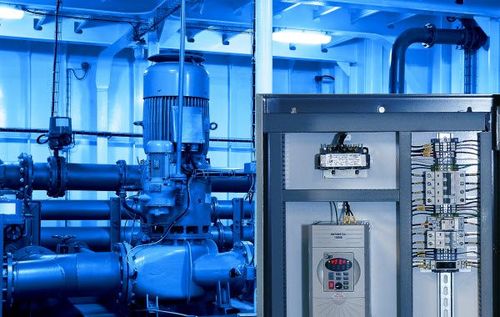 The use of a frequency drive provided with an asynchronous motors having a short-closed rotor makes it possible to eliminate the listed disadvantages of DC engines and mechanical adjustment systems. These machines are the cheapest, structurally simple, have no brush apparatus, and can be adapted to work in the most severe conditions. The introduction of control systems using a variable frequency drive is an innovative measure and usually pays for itself quickly.
Variable frequency drives manufacturers offer a wide range of drives for applications involving electric motors. The ideal solution for all kinds of loads, pumps, and fans. Mid-range systems are used in coal-fired power plants, mining, mills, utilities, etc. The range of ratings is as follows: 3 kV, 3.3 kV, 4.16 kV, 6 kV, 6.6 kV, 10 kV, and 11 kV.+

With the advent of the variable speed drive, controlling water pressure at the end-user is no problem. The interface with a clever script structure is perfect for controlling pumping equipment. Thanks to the compact design, the drive can be installed in different cabinet designs. The new generation products have the properties of advanced technology:

In terms of optimization and potential benefits provide the opportunity to: 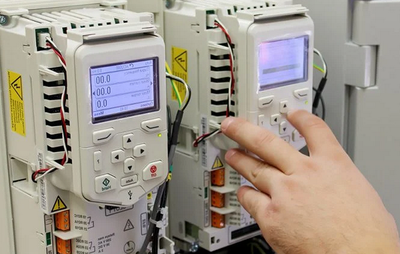 The VFD working principle, based on which the frequency drive functions, uses the basic property of rotating electric machines, expressed by the dependence of the electromagnetic field parameters of the stator on the voltage frequency. Thus, the angular velocity of the electromagnetic field of the induction motor stator is expressed by the formula: 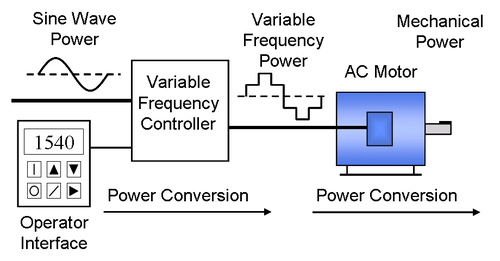 f1 - frequency of supply voltage, p - number of pairs of poles of the stator winding.

Consequently, by changing the frequency of the supply voltage, we can smoothly regulate the angular speed of the rotating field of the stator, and hence the rotor speed of the motor.

Rectified voltage, in addition to the constant component, also contains a variable, which has the form of unidirectional pulsations with a certain amplitude. The presence of high-frequency components, caused by pulsations, hurts the operation of electronics, so frequency-controlled drives are usually equipped with filters of this kind.

An inductance in series with the load allows the DC component of the current to pass unobstructed, giving it only a small active resistance of the coil wires. The alternating current component, however, experiences the inductive resistance of the choke. In this case, during the half-period of current rise, the choke induces an EMF of the opposite direction. At this time the core is magnetized, i.e. energy is stored. In the same half-period, the filter capacitor is charged. In the half-period of current decay, the energy stored in the choke is released, preventing it from decreasing, and the capacitor is discharged to the load, also maintaining the value of current. This results in significant smoothing of the AC component.

The inverter forms an alternating voltage with variable frequency and amplitude at the output. The basis of the inverter circuit consists of power electronic switches, the functions of which are performed by transistors, made by IGBT technology. The VFD principle of pulse-width modulation is used to control the keys. The control signals are generated by the pulse-phase control system. The actuator regulation process can be performed either manually, by setting the task by the operator, or in automatic mode.