Coriolis mass flow meter is a device for measuring the flow and density of a substance flowing through U-shaped tube. 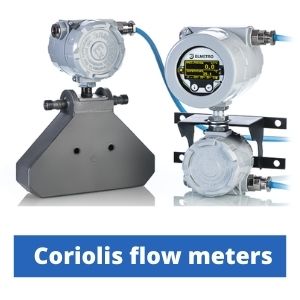 Let's start by looking at the main details. There are many types of coriolis flow meters. Their design can vary, but in general, it consists of several basic elements:

Tube is a zone where basic measurements take place. It is always U-shaped. Sometimes two of these tubes can be used for better flow sensitivity. In this case, a flow splitter is also presented. It directs half of the main flow to each tube. 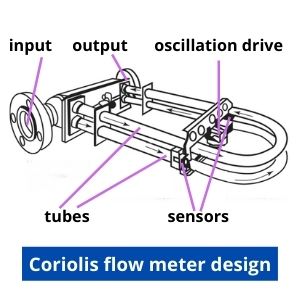 Sensors are placed at the input and output of the tube. They record changes in oscillations at the system inlet and outlet.

Oscillation drive makes a tube vibrating with a constant frequency. The most popular method is usage of pair coils and magnets. In that case, the oscillation is made by magnetic fields. However, there is no need to equate them with electromagnetic flow meters. It is just an auxiliary process. There are also models with mechanical actuators, but they are less common.

Transducer collects signals after measuring and converts them into digital or analogue data. After that, the results can be shown on display or send further to control systems. It is always possible to install additional counters to accumulate and structure results autonomously.

How does a Coriolis flow meter work?

Coriolis flow meter working principle is based on the Coriolis Effect. In nutshell, the Coriolis force is one of the forces of inertia that affect tube oscillations. You may see an example of this principle in a garden hose. It wriggles like a snake when water flows through it. 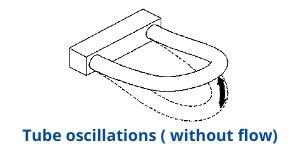 When work starts the drive begins to push the tube. Hence, it starts to fluctuate with a certain frequency. The sensors are located on the two sides and record current vibration parameters (without flow).

When the tube is not filled, both ends oscillate in the same phase. On the graph of frequency oscillations, the sinusoidal at the input will be equal to the parameters at the output.

Tracking the fluctuation's frequency is the main part of the measurement. When a substance, such as a liquid, begins to move through the pipes, the tube experiences additional distortions in frequency due to the inertia of the flow. It happens because the flow interacts with pipe walls. 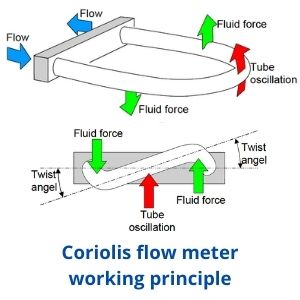 The results may be strongly affected by external vibration. If it cannot be avoided you can use ultrasonic flow meter.

Due to the appearance of additional effects on the walls, the inlet and outlet of the tube starts to vibrate in different phases. Now their sinusoidal oscillations will have a difference in the form of a small shift between them.

Such a difference is called a shift phase and is often referred to as ∆t. The consumption directly depends on this indicator.

Such mass flowmeter is even capable to measure slurry materials.

After the sensors record changes in oscillations at both sides of the tube, the system proceeds to analyze acquired information.

With the help of such equipment, the user can measure several parameters at once including: 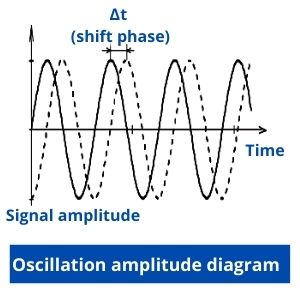 Mass flow rate is determined by comparing and analyzing the time delay between two sinusoidal phases. This phase shift ∆t is measured in microseconds (µs).

This parameter is directly proportional to the mass flow rate. The higher ∆t, the higher flow rate.

Density is also measured by analyzing sine waves in oscillations. When the flux density changes, the tube walls oscillation frequency changes too.

Consider this situation on the example of two different loads, suspended on the same springs. A bigger mass will have a lower oscillation frequency. In the same time, a spring with a smaller load will move more often. 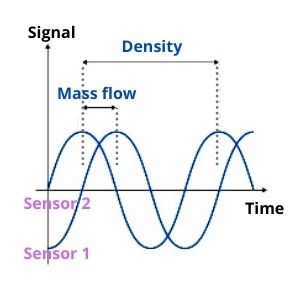 In the case of flowmeters, the same volume of different substances will have a different mass due to its density and will act as such load. The tube here is similar to a spring in the example. That is, the greater the density of a substance in a stream, the lower wall frequency of oscillations.

According to this principle, the device determines the density of the measured material.

Coriolis flow meter pressure drop is directly correlate with flow sensitivity. This value is defined in microseconds of phase shift per unit of mass flow. Therefore, the higher this value, the larger the possible tube diameter and the lower the pressure drop.

After considering the flow sensor design and its principle of work, let’s look at main advantages and disadvantages of such device.

Advantages of a Coriolis flow meter: 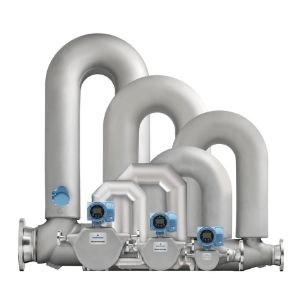 Some of such issues can be corrected by improving the design of the device. For example, the user can minimize vibration affecting on the device by installing the equipment on rubber sealing, etc.

In general, these types of transducers represent a simple and effective way to measure flow parameters in pipelines. However, they need stable physical conditions for operation.

Presented units do not have high installation requirements. They don't need straight pipes sections before and after them like turbine flow meters. 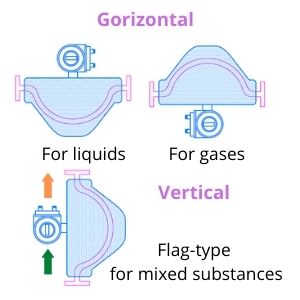 Coriolis flow meter installation orientation is a key factor for accurate measurement. The direction of mounting depends on a medium type.

For liquid measurement, it is better to put down curved sections. In this position, excess gas and air will be discharged from the working area. However, it should be avoided the mounting of the device where there is a downward pipeline section after it. This may cause a siphon effect and increase the measurement error.

For gas or steam flow meters, it is better to put up the pipes. This position will remove excess water and condensation from the tubes. Do not install the device at the highest point of the pipeline. Air or gas may accumulate at this point and interfere to accurate measurements.

Flag-type installation (vertical) is optimal to work with both mixed and double-phased substances. It is also suitable for suspension low-flow liquids. Flow direction should always be from bottom to top and perpendicular to the horizon.

Try to avoid mounting close to valves and manifolds that create additional turbulence. Btw, the turbulence is a key factor of vortex flow meter working principle.

Before mounting read the manual and datasheet carefully! Each manufacturer may have different calibration and installation requirements.